The funny thing about Israel is that everyone looks familiar. Not that it's not a diverse country, it is - you see every skin color and then some and once you get past the weirdness of an asian woman opening her mouth and speaking hebrew it's cool.

But still, take a look at all the white people and they all look like someone you know. Keep looking and after a while you realize it's because where the majority of the white population is Jewish. And if you believe the statistics, one of every six (or four, depending who you read) of these people is related to you or your Aunt Sadie.

For those of you (that would be everyone) used to being a minority population in your country, this concept is a bit mind-boggling when you stop to think about it. A whole country when even the most secular of people refers to their Saturday night parties as those on "motzei Shabbat". It's pretty freakin' awesome. 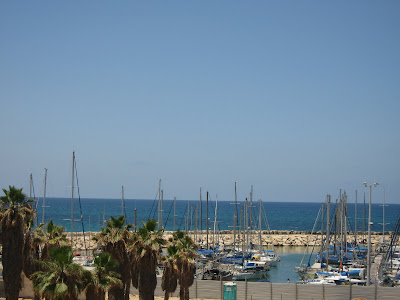 Now let's talk about the beach. For the geographically challenged, Israel sits on the eastern shore of the Mediterranean. Here are some fun facts, with some help from Wikipedia. First, you should know that large islands in the Mediterranean include Cyprus, Crete, Euboea, Rhodes, Lesbos, Chios, Kefalonia and Corfu in the eastern Mediterranean; Sardinia, Corsica, Sicily, and Malta in the central Mediterranean; and Ibiza, Majorca and Minorca in the western Mediterranean.
If Poker Chick had more than 2/3 of one (out of three total) battery packs left on her camera, she'd show you the funny splotchy sunburn on her foot. Like a splash of burn. But she can't so you'll have to imagine it.

The funny thing about the beach is that it's almost impossible to find an American these days there anymore. It's all Europeans - a lot of Brits and French, a smattering of Germans, Spanish and others. Americans are not so much loved in this (or any) part of the world, and Poker Chick has never seen it in full force like this.

Now, to answer the first question, why are there no Americans? Because in case you hadn't noticed the dollar is in the toilet, peeps. Fellow ad friends have seen the effects as the tried and true international shoot is slowly becoming a thing of the past. Fashion friends can no longer afford such luxuries as Prada and Louis Vuitton. International friends obviously had this realization before yours truly.

But it's true. Look at everyone else in their Dior sunglasses, and you realize.....we've become poor! And the rest of the world is becoming richer as we obliviously watch clips like "The cutest puppies in America" on "morning news" programs. Know what you get when you turn on the news here? Take a guess, c'mon. That's right! It's......REAL news! Imagine that. Now imagine all the people 'round the world pitying us ignorant Americans as we eat our McDonald's and pet our pooches.

Poker Chick is by no means unpatriotic, but it is......embarrassing. We need to get our act together and wake up and realize the world is much bigger than we are and the days of the American empire are over. Thanks, G.W. Swell job.

Loyal readers should stay tuned for more. Coming up.....tales of Jerusalem and the yuppification of Tel Aviv.
Posted by Poker Chick at 2:22 AM

My parents are going to Israel in July & are totally psyched. I've never been, but definitely plan to.

And cork? It's a tree, I think. Makes the cork we use in wine bottles, correct?

I believe cork comes from a certain type of tree. The bark is harvested every 9 years or so.

Yuppification of Tel Aviv. Now that's one heckuva post to wait for! :D

Just found your blog and have been enjoying it immensely. May I link you?

Have a great trip! :D

of course! link away. Glad to have you.