So now we come to Amsterdam. Land of legal prostitutes and free pot. Oh yeah, and tulips, clogs and cheese. Right. Cheese.

If you look closely, you will see in the white that this building was erected in the year 1345. Turns out this was the year of the great miracle of Amsterdam. We won't go into it, but the miracle involves a con artist and some fireproof bread.
The other day a gentleman asked Poker Chick what the difference was between Amsterdam and Rotterdam. Aside from the obvious answer, turns out Rotterdam is totally modern in comparison. Why? Because it was leveled during WWII while Amsterdam remained relatively unscathed. So Rotterdam rebuilt in the 20th century whilst in Amsterdam there are loads of buildings around for almost 1,000 years. In fact, there seems to be some law there where if you fix up a place you have to retain the integrity of the facade. So everything stays looking old. Or "charming" as realtors in the States would say. 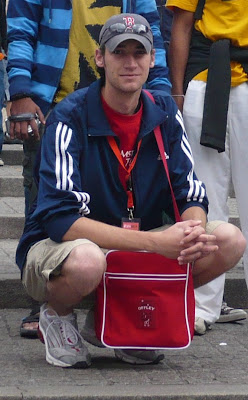 Amsterdam was a trip. Tons of tourists, mostly from England and Australia. Couple of Americans, though not many. One thing Poker Chick did that she highly recommends was a free walking tour. It sounds cheesy, but these people make it cool and therefore their clientele is cool as well. They tell you neat facts, like the history behind those funny metal things in random street corners. Turns out, they punish junkies who want to piss in corners by repelling it back and in some evil cases even electrocuting them. That's Dutch initiative for you. Poker Chick sends a shout out to Basilio, for being the most awesomest tour guide. We also send a shout out to our new friend Clare, who is blonde and Australian and swears she's never heard of the show Lost. Surely, you lie! You were J.J. Abrams' secret lover, weren't you? Admit it! Okay. Maybe not. You're still cool.

Now let's talk about food. Highlights of the day: amazing chocolate croissant. Coffee (it's so damn good abroad). Yogurt smoothie. Fries with mayo. We got a beautiful picture of some waffles but we'll have to wait to actually eat some on the way back. Can't eat it all in one day.

The canals are truly beautiful. Poker Chick's never been to Venice, but this is the closest she's come. Seing houses come out of the water is neato.
Most surprising? The sun was strong. Real strong.
Finally, we're back to vanity. PC was most pleased with her choice of frayed all-stars for her traveling feet. They seem to be the hip shoes in several countries, Netherlands included. Or, as the Dutch say it, Neyderlunds.
Stay tuned for more......
Posted by Poker Chick at 12:13 PM