Lose the Hat or Forego the Milk Duds

"Trick or treat"! What does that mean, exactly? Do a search on the web and you'll come up with many different definitions. Though it depends on the country you live in, for American peeps it means the following:

Trick or Treat, also known as Guising, is an activity for children on Hallowe'en, in which they are dressed up in costumes, often of supposedly malevolent supernatural beings such as ghosts, demons, or witches, and proceed from house to house, asking for sweets with the phrase "trick-or-treat?" with the implied threat that, if their demands for confectionery are not met, they will perform some "trickery".*

Now, what's not to like about Halloween? Dressing up. Candy. Parties. It's all good. But there's one aspect of Halloween that's always bothered us: parents who dress up.

We're not talking about adults going to parties, parades or celebrations where other adults are in costume. This is acceptable with grownups- only when alcohol is served.

We're talking about the parents who go around trick-or-treating with their kids in full costume. I mean really, how, in anyone's mind, is this a good idea? It's great to go with your kids. Be there with them and enjoy the night. That's all you need to do. Now, maybe your kids liked your costumes when they were little. But at some point the kids get old enough to look around and realize that Bernie there, down the street, his mom never dresses up. And in school, Lily's mom never dresses up. And the dad next door has never dressed up... 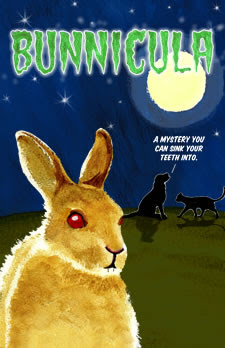 At what point do they realize it's just kids in costume and look at you in confusion? And if your rationale is trying to make memories, does anyone's fondest Halloween memories ever really involve their mom's rendition of Bunnicula?

Now, in Poker Chick's house, the response to this embarrassing sight is withholding candy. You see, when we opened a door expecting children in costume and also got a grownup in full witches' attire and a painted white face with blood streaks, we'd already been tricked. And horrifically so, might we add. So the "trick or treat" decision was already made. No treat for the grownup. Just a mean trick they played on us. Despite what these people thought, it crossed the line from cool to creepy.

This is of course one opinion. Some grownups clearly support the action of dressing up with your kids, or this would not be the national epidemic that it has become. But something tells us that if you've read this blog before and actually enjoy it, you're not one of those people.

So this Halloween, help us get out this plea to our fellow parental peeps. Please no costumes. If you feel you must, stick the bunny ears in your pocket and put them on only to answer the door.

Or, at the very least, bring a flask with you.

*Quote from the explanation guide here, which according to Poker Chick explains it best
Posted by Poker Chick at 7:12 PM