Mother's Day used to be a political minefield around at casa Poker Chick.  After burying our own mother a week before this Hallmark holiday, we didn't particularly want to see the in-laws or any other mother for a while.  Celebrating another mother while our own was gone - the pain and unfairness of it all was more than we could handle.  Back then, "Mother's Day" necessitated a pint of Haagen-Dazs or a bottle of tequila, depending on which friend was on call that day.  This continued pretty much every year until mini came along. 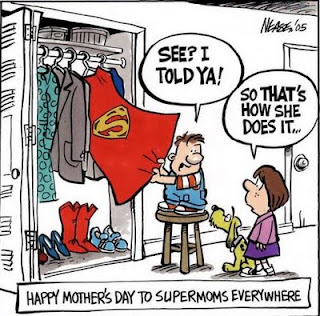 Even then, until she was big enough to jump into her "Mama's" bed after determining she had let her sleep in long enough, throw her arms around her and yell "Happy Mother's Day!" while throwing the mandatory homemade card and probably banging her Mama in the face with some sort of head-butt pose, until then - it just didn't feel like a real Mother's day.

But year after year it got easier.  In preschool they made gifts like bookmarks, mugs, calendars.  All with the children's pictures on them, of course.  In fact, Poker Chick is happy to report that the rumors are true.  Your mother really does think all your crap is beautiful.

Our community grew even more once she started school, and with it came more mothers to hang out with on a regular basis.  And the more people we know, the more people we bump into while out at the playground, bookstore, Pinkberry.  Walking around with a 6 year-old pulling on your arm while bumping into tons of people you know - all wishing you a happy Mother's Day - well, it's enough to flat out squash the urge to visit the cemetery that plagued us for so many years.

Today we had the pleasure of visiting an overwhelmed, exhausted, new mother who one week into motherhood has just now gone far enough past the initial joy to reach the "what-the-fuck-have-I-gotten-myself-into" phase.  (Yes, peeps, we just said the f-word.  Get over it).  Watching someone become a new mother, knowing what great things they have to look forward to once they get out of the "looks like an alien, poops like a large zoo animal" phase, well it was the best present ever.

One last note: to her school - what's up with the lack of gift? Seriously, peeps, you're such a nice school.  After years of mugs and t-shirts you mean to tell us it just stops?  You decided to just stop making cheesy tzotchkes for their moms at school? We don't mean to complain but some of us were looking forward to those slobbered on scribble scrabble bookmarks. At least give us adults a little warning next time, will you?  Think of all the dads who were counting on it and spent the day in the doghouse.  Figuratively speaking, of course.  This is, after all, Manhattan.
Posted by Poker Chick at 9:46 PM

Email ThisBlogThis!Share to TwitterShare to FacebookShare to Pinterest
Labels: motherhood

Was it just her class that didn't make a gift? Maybe her teacher isn't a mother and didn't realize the importance...?
Or maybe the school has a policy of not recognizing holidays?
Just ideas.

A toast to Poker Mom, what a nice post. Happy Mother's Day to you. And, your school sucks, they should be sending you some love home in the backpack.

Mountain Momma - the school's actually awesome, which is why it was so odd. They usually do so it's a mystery.