5 Things I Learned At My Kid's Piano Recital

This was an interesting cultural experience that was new to this musically-challenged mother.  After entering a hot small room packed with 18 kids and their families, she watched all the 4-7 year olds, one by one, take their moment to shine.  Here are the few things we learned:

1) A keyboard is just not the same as a piano, even if it's a good one.
We cheaped out seeing as how none of us know how to play a piano, nor do we have room, so keyboard it was.  Poor mini fumbled for the first few notes getting used to the pressure she needed to exert on the keys.  Whoopsie.

2) Some kids practice, and some kids really practice.
We thought mini was ready.  She practiced every day, on her own.  Not at a formal time, just whenever she felt like it.  We heard her two songs the morning of the recital.  But clearly, seeing as how smooth the other kids played their pieces, we underestimated the amount she should practice.  Another clue that the other kids played it too much: they kept going over, repeating the song even after it was done and the applause had started.  After this had happened a few times, and a 5-year old boy asked his mom "not 5 times?" we started figuring it out.

3) Your child is not the piano prodigy you think they are.
We now suspect part of the incentive to run these recitals is to humble a parent or two.

4) The teacher is better than you think they are.
If the goal was to sell us on the need for more lessons, it worked.  One 5 year old just came in and schooled everyone with his version of that king song who's name we can never remember from "Shrek".

5) Kids can surprise even the most seasoned piano expert.
Hands down the funniest moment of the night goes to the poor 4 year old boy, who sat in his chair, played 3 off-key notes, then ran.  His mother got up in front of everyone to announce he had to go to the bathroom.  It was so funny we hope someone got it on camera to replay it for his teenage friends someday.  As everyone bit their lips to stop themselves from laughing, the teacher summed it up: "there's a first time for everything."

Indeed, there is.  Congrats, mini.  Mama is so proud.
Posted by Poker Chick at 9:38 PM No comments: Links to this post

5 Ways Times (and words) Are A-Changin'

What's up with no one talking in full sents anymore? At least no one cool or under the age of 18, it seems.

We're down with the shorthand on texts and tweets, but it seems to have spilled over a bit too much into our lang, ya know?  Has anyone realize the extent to which this is impacting our pop cultch? 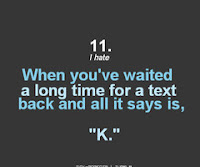 We'd say more but then we'd be over our unoffish char limit.  Hmmm.  Maybe this short speech thing ain't so bad.
Posted by Poker Chick at 6:49 PM No comments: Links to this post

Apparently you readers see this as a food allergy mom blog.   This is not so surprising we suppose.  "Women with twisted senses of humor who work in advertising and have children who also happen to have food allergies that they often write about" was not a category.  Go figure.

What was surprising was seeing this little blog get almost 300 votes in just a couple of days after being nominated for "Top 25 Food Allergy Mom Blogs".  So is the fact that "Top 25 Canadian Mom Blogs" is the next category.  Interesting...

Here's where the favor comes in:  we're just past 25 right now and would really like to keep the badge!  It's pink and all, you see.

So if you have enjoyed reading any of these warped thoughts, we'd really appreciate a literal vote of confidence.  You can click on the badge in the right-hand navigation bar, or follow this link:  You can vote once a day until Nov. 16th.  In fact, you can vote even if you haven't enjoyed reading this blog.  We won't hold it against you.

Thanks, lovely peeps!  And more importantly, thanks for reading!
Posted by Poker Chick at 8:52 PM No comments: Links to this post