Well, peeps, its come to this. A tropical hurricane and a winter storm all within barely a week of one another. A hurricane in New York at any time is rare. A hurricane in October even rarer. A winter storm in early November is rare. A storm on the heels of a hurricane is unprecedented.
Has this ever happened anywhere in history? We'd venture to think not, but if anyone can find examples to cite, we're all ears as we'd love to hear evidence to refute the scary implications of an unprecedented freak show of weather in this state.


Many of you have inquired as to how we fared with these storms. Fortunately, we kept our power and are fine. Sadly, many others are not, and it is them we have been thinking of.  As for lessons learned, we now know that we are a total scaredy cat and should not weather storms as the only grownup in the home next time. The only person crying like a baby should be the mini. Just sayin'...... (In our defense that was some wind though.)


Meanwhile, the freakish fall snowstorm brought up memories of our post last year, The Halloween Horror Snow. One of our all-time favorites, so please to enjoy.
Posted by Poker Chick at 10:27 AM No comments:

It's been a while.  Worse, we're about to go preachy on you for a bit.  Suck it up, 'cause this one's important. 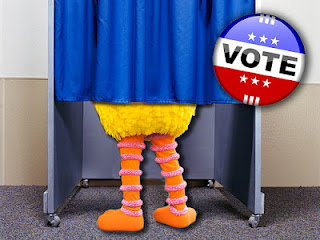 See, we'd like to ask you to go vote.  Except we know that won't work because, for starters, scientific research has proven that asking people to vote isn't enough.  And by "scientific research" we mean because we said so.  Secondly, we know that if you're reading this you're either already going to vote, or you're Canadian, in which case you get a pass -- but only just this once.

So instead of asking you to go vote, we're going to ask you to stop anyone from talking yourself OUT of voting, and to help get others to vote.

Observe some typical barriers to voting, along with responses you can use:

Argument: "My state's going all blue (or red), my vote doesn't count"
Response: "Awesome! Let's skip the lines and go get ice cream.  Just kidding.  Even if your vote might not make a difference that year, it's a symbol of your freedom, and it sends a signal to others.  Telling people you voted might inspire 10 other people to vote.  Conversely, not voting breeds additional non-voting.  See what you did there? You made us say boring words like "conversely". Can we go get that ice cream now?"

Response: "I don't like either of the candidates"
Answer: "Tough sh-t.  You get two Presidential candidates.  But that's not all - there's loads of people to pick from in the local races, and you might actually like one of them! As an added bonus, those political peeps probably affect you way more than the head honcho."

Argument: "I have better things to do"
Response: "Maybe, but will any of things give you an awesome sticker you can wear all day long to tell people that you did it? We didn't think so."

Argument: "I have no childcare"
Response: "Nothing says Democracy like shoving a bunch of kids into a voting booth with you while they whine for Sponge Bob.  What do you think we'll be doing on the way to school tomorrow?"

Argument: "I don't know who to vote for, so I'm just not going to vote"
Response" "Grow a pair and pick one".

As a bonus, if you live in New York City, the Governor just signed an order that says you can vote at any polling place.  So there's no excuse peeps.

We know this may be mind-boggling to some, but the idea of a participatory government is that you actually participate.  And other than jury duty, which is forced on you, that leaves voting.  Now, notice we haven't told you who to vote for, nor have we engaged in partisan politics bashing each candidate.  We're not trying to influence your decision, because that's the point.  Everyone's had months to make their arguments, and at this point, it should be your decision.  But no one will know what it is if you don't actually make one and mark it on a ballot somewhere.  So please, vote, remind your friends/family/coworkers to vote, heck, pass this along to them if it'll help.  The point is to talk any sissies that want to willingly abstain out of it.

See? Told ya we'd get preachy on you.