The Princess and The Peanut

I was lucky enough to snag* an advance copy of a new book called The Princess and the Peanut, written by Sue Ganz-Schmitt. 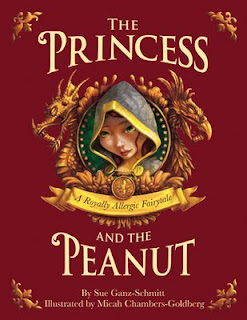 This is a new book that covers a sorely needed gap, food allergy education for children.  And it's not just for the children with the allergies.  In fact, after reading this, I'd say it's really best for kids who have a friend or classmate with food allergies.

See, some crazy people have the notion that if you educate kids on food allergies they'll be less likely to - you know - protest and such when they have to give up things.  Crazy, I know.  But I just happen to buy into that kind of crazy.

So I sat down with my 6-year old girl who is also allergic to sesame, eggs, tree nuts, and (wouldn't you know it) peanuts, and we both dived into our first book review together.  Truth be told we were both skeptical: she, because she feared it might be boring or scary, and I because I was terrified it'd be cheesy.

It was neither scary nor cheesy.

The Princess and the Peanut is a cute, modern take on an old classic, however in this one, a poor unsuspecting princess who doesn't even know she has food allergies is in for a surprise when the Queen runs out of peas and uses a peanut for the royal princess test instead.  After all, what could happen?  What follows is a smart, matter-of-fact and fun story showing what to do should you have or encounter anyone with an allergic reaction.

Beyond the obvious, there was a lot to like.  Things the mini liked:

It was silly.  The book has a surprisingly humorous tone to it, which she loved.  She particularly enjoyed it when the royal princess had a skin test to various things.  While "peanuts" came out positive, we were both pleased to find out that neither "three blind mice" nor "dragons" induced a reaction.   And any book with a court jester is automatically awesome to her.

She could relate.  She saw the picture of the princess having a reaction and knew what it was.  She saw the royal epinephrine, the skin testing, the abandonment of products that may contain peanuts, and she knew exactly what that felt like.

What did I like? Well any parent knows if you find an educational book your kid likes that's reason enough to like it! But beyond that, what made me happy was that it was accurate.  My biggest fear was that it would perpetuate some kind of misinformation, like if the princess got a shot of epinephrine but then stayed home instead of calling 911.  Fortunately, our fears were put to rest as the book elegantly weaves in key topics of treatment, diagnosis, and the importance of avoiding the offending food.

I thought it was surprisingly engaging.  I particularly liked the pages of illustrations where mini had to come up with the story herself.  I like books that force my child to think.  I like that it presented information without being preachy or boring.

Another good thing? The princess was still cool.   There was no "poor me".  No one was pitying her or looking down on her.  She was still a strong, smart, desirable princess.  However, people who loved her like the prince had to do things a little differently if they wanted to be around her.  And it was no big deal.  Which is exactly as it should be.

My favorite part? When we put the book down and I asked my daughter if she liked it and she had a huge grin on her face as she said "I LOVED IT!"  That princess was cool, and she could relate.

Overall, I love the lesson that this teaches.  I love that it teaches kids actual facts that are medically accurate.  And while it did not end as I had hoped (we don't want to spoil it but here's a clue: they went traditional vs. modern), I let that one slide because the story was so cute overall.

So we'll be going on Amazon and pre-ordering a copy for her classmates tomorrow, along with Ganz-Schmitt's first book, Even Superheroes Get Diabetes.

You can do the same, or you can wait until it'll be sold in bookstores next month.  If you simply can't wait, check out the trailer, the music alone will put you in a good mood.   Meanwhile we can't wait to see what topic she tackles next.

Was there a section where the kingdom thinks the princess is being dramatic? Were there serfs who refused to acknowledge the possibility that something that hadn't existed before could now exist? No? Maybe the story takes place before the Black Plague.