We've talked before about how motherhood turns you into a sentimental sap, and never is that more true than at the end of a school year.

One night, a week or two ago, we were talking to a friend wondering why we were such a mess and for the first time it hit us just how emotional we get every June.  While we've often talked about the annual nightmare that is September, we didn't realize that June came a close second until this year.  The end of year concerts, parties, notes to write, camps to plan for, and in the midst of it all.....the undeniable fact staring at you in the face that your child is getting older no matter what you do. 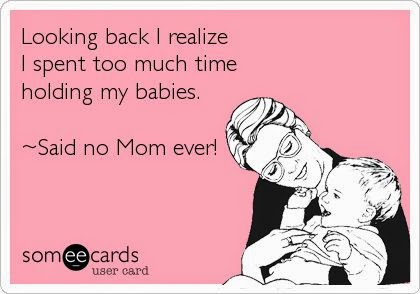 Yes, we suppose this is a good thing, but there's something about finishing yet another grade in school that reminds us that it's a year we'll never get back. And we realize that other things we've loved for years, like holding their little hand when we cross the street, getting a running hug from an excited child when we come home from work...well, these things will soon be replaced with headphones and eyerolls and requests not to sing in public (sadly, the latter has already begun).

3rd grade.  THIRD grade is over today.  Mini is now way past the initial stage of superhero status that parents enjoy in their tiny children's eyes, and has now entered a more speedy descent that ends with the dreaded "drop me off at the corner so no one sees you" stage (more on these stages here).

And (gasp! we can't even say it) fourth grade means....well, only two years to middle school.  Middle school, peeps!! And then before you know it there'll be sleep away camp and college and no kid in the home anymore.

It ain't fair, we tell ya.  We wipe their butts and their noses and feed them and dress them and think about their every waking moment and then finally - finally when we get it right, if we've done our jobs well enough, they move on.  How is this fair, we ask?

Now, lest you think we are on an isolated soapbox an informal but super scientific poll of mothers at drop off over the past few weeks shows unanimous results: mommy nostalgia is real and it's rampant.  So rampant, in fact, that even though we've spent the past two weeks patting ourselves on the back for making up such an accurate phrase to capture it, turns out someone else beat us to it.  Yep, mommy nostalgia has already been documented.  While kids and teachers are eager to yell "school's out!," moms everywhere are watching yet another little piece of childhood passing them by.

So if you see a mother this week and she seems just a wee bit more crazy sensitive than usual, have some compassion.  It ain't easy, peeps.  Even the good parts.

We borrow our kids, like our earrings, from the universe. They are ours to take care of and enjoy , but only temporarily.