New Yorkers were taken by surprise today by the first October snowstorm in the city since....well, ever. 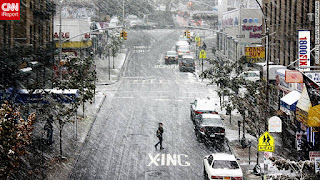 The snow messed everything up.

Occupy Wall Street protesters were brutally reminded of the generators they had lost just one day ago but chose to stay and freeze.

What is the reason for this bizarre weather?

Well, some people think the end of the world is upon us.  One theory is that we all died May 21 and are now in some alternate universe without knowing it.

That's one way to go.

Another theory is that while the world didn't end on May 21, a chain of events was set off that will build up to our imminent destruction.

People who subscribe to this theory were doing giant "I told you so!" dances in August after the Gotham City was hit by an earthquake and a hurricane, in the same week.   Since then, residents have been bracing themselves for locusts and cattle sickness, as surely these must be next.

Others are saying the May 21 date is really October 21, and they too are probably doing little dances today.

These are all interesting theories.  But we have another one.

You see, none of it made sense until now.  The earthquake, hurricane, both of those were rare, mild, and technically the earthquake wasn't even anywhere near New York.  So to link this recent snowstorm, a storm that brought us thundersnow, no less, to those events is odd.  Thundersnow, peeps!  Do we have to hit you over the head?

Clearly, we must blame the Canadians.

It was only a matter of time before those mild-mannered folk up North finally realized they had twice as much land as everyone else and set out to conquer the rest of North America.

It's a genius plan, really.  First, they hit us with their freak snow and next thing you know there's Caribou all over the place and every tap in the city is filled with Molson.  Then, when we're weakened, they hit us with (gasp!) their socialist medicine and gun control laws. We must stop them before it's too late!

Did you not see those Royal Canadian Mounties riding around the village today?  You didn't actually think those were Halloween costumes, did you?  That's exactly what they want you to think.  They're stealth, these snow-lovers, we tell you.  Stealth.  But what else would you expect from a nation whose first official citizen was named Snorri?*

Fortunately, we're onto them.   So next time you see a whole bunch of Canadian tourists "in town" after a bizarre aberration of Mother Nature, be on guard.  We're just saying.

*You can't make this stuff up! "Snorri", born in Vinland around 1000 A.D, was the first North American child to be born of European parents (Thorfin and Gudrid).
Posted by Poker Chick at 9:04 PM

You know you love us Canucks - it is impossible not to be taken in by our humor, equanimity, and entertaining alcoholism (I am one half American so the equanimity didn't take).

I can't believe you have stumbled onto our plot. I am sorry, I will have to silence you. How is 100 beaver tails?

Yes you two I have stumbled onto your plot. Yet, somehow even now that I I am onto you I am unable to resist that sense of humor...