The Script if I Were a Judge on Iron Chef....

Once in a while, a girl's gotta experiment. If you know Poker Chick IRL, you could probably write most of this yourself. If not, please to be amused.


Battle Butter is a tough one. Iron Chef fat guy battles fancy shmancy restaurant owner. Both literally sweat it out as they use tools you've never seen or heard before (the giant parmesan slicer! the sausage pot! the bonito flaker!) A third chef (we'll call him famous balding cook) provides color commentary. 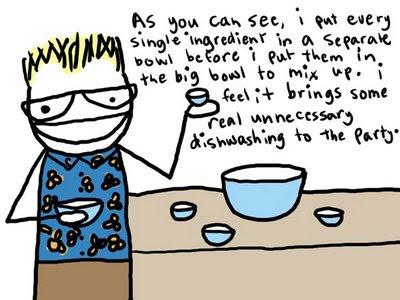 Poker Chick watches this "frenetic culinary battle" intently, along with her fellow judges:
Mrs. Hatsushihamamama (Japanese housewife and sometime food critic who lives in Poker Chick's imagination), Fukui-san (imported commentator from Iron Chef Japan) and that dude from Queer Eye. Finally, the moment, arrives. Poker Chick is presented with a series of small plates, each weirder than the next. She takes a fork and pokes at her
food.

"This is a local delicacy where I come from. Polenta cakes on arugula, topped with pureed cow brains."

"The butter is in the flavor. You have to taste it, you can't see it."

"Voila, anchovies and tomato paste with mango salsa. That's a whole boiled baby quail right next to it."

"Where's dessert? Don't you have to make a dessert too?"

"I am sorry, there is no dessert"

"There's five courses. But there has to be dessert!!"

"I'm afraid there is not. But please, taste this butter-fried cod with lamb tongue. It's divine."

"Five courses and no dessert? But you peeps always make dessert!"

"First of all, I believe the word you are meaning is 'people'. Now that is a baked cheese flan with frisse greens and tomato coulis. It is in a cup made from the wax paper surrounding the butter."


"Now it was tough to pull off in an hour, but on top of what you are eating is special eel sauce. It really pulls the flavor of the butter out."

"Well, I am certain you'll like my final dish. It's a butter BLT".

"I don't suppose you made dessert either, did you?"

"But I did. Butter-soaked bananas with valrhona chocolate."

Something tells me Poker Chick would not be invited back to the show. Despite what one might think, battle butter was not butterific. 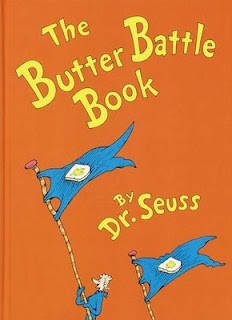 A different kind of butter battle.
Posted by Poker Chick at 8:51 PM

Mmmmmmm... Butter. Are we too fussy to be foodies???